Press Kit – A Riddle in Ruby

Synopsis of A Riddle in Ruby:

Ruby Teach is a thief.Well, a thief-in-training. And a pirate’s daughter. A smuggler. A picklock. In a world ruled by alchemists—who mix magic and science—Ruby has always relied on nothing more mysterious than her skill and her sneakiness. Swindling and stealing are straightforward.At least, they are until she bungles the robbery of a young aristocratic lord. Now, Ruby’s father has been captured, and she must flee deep into the heart of a city filled with characters both honorable and nefarious. The Royal Navy and the leaders of a notorious secret society are hot on her heels.Because Ruby has a secret. One even she doesn’t know.The world is filled with those who would help her, and those who would use her to their own dark ends. Can Ruby trust anyone? Can she even trust herself?

Praise for A Riddle in Ruby:

Kirkus: This tale of revolutionary intent, self-discovery, and double-crossing cross-dressing is worth the trip. Sailors seeking espionage and a cast of characters who can’t sit still should embark on this series’ maiden voyage.

Book information for A Riddle in Ruby: 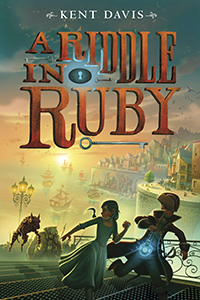 Tumblr: What Makes Us Happy, Makes Us Wise